On December 23rd, at the apex of the holiday shipping crunch, UPS tweeted that they „were experiencing heavy holiday volume„. This refrain would repeat every few hours, coupled with an apologetic statement saying that „the volume of air packages in our system exceeded the capacity of our network. … We apologize„. An unspecified percentage of packages did not make it to customer’s homes for Christmas.

What followed was an onslaught from traditional and social media critiquing UPS operations and calling them to task, including a senator calling on UPS to refund customer expenses. Stories in every major outlet described the families left without their packages on time, while retailers like Amazon blamed UPS for delivery failures.

But you likely already read about that. In this post, we’ll talk about what went right for UPS. The sheer scope of this operation is enormous. In 2005, UPS was delivering 230 packages every second during the peak holiday season. This year, that number shot up to 300 packages delivered every single second. The complicated peak season planning, led by Scott Abell, has been underway since last January. UPS’s fleet has over 230 airplanes and almost 300 daily charters but it supplemented these with another 23 chartered airplanes for the holiday season. All in all, UPS had almost 2,400 flight segments every day during peak week. And to get all hands on deck, UPS also hired 55,000 seasonal employees in the US alone.

Right now, there are a number of factors that are being cited as responsible for the delivery shortcomings:

There is no doubt that things did not go as planned for Brown. A UPS spokesperson told Bloomberg that they are „conducting an analysis of what caused the delayed air shipments“ and I’m sure that next year UPS will be better prepared. But let’s look at some of the things that were definitely steps in the right direction, as well as two that almost were: 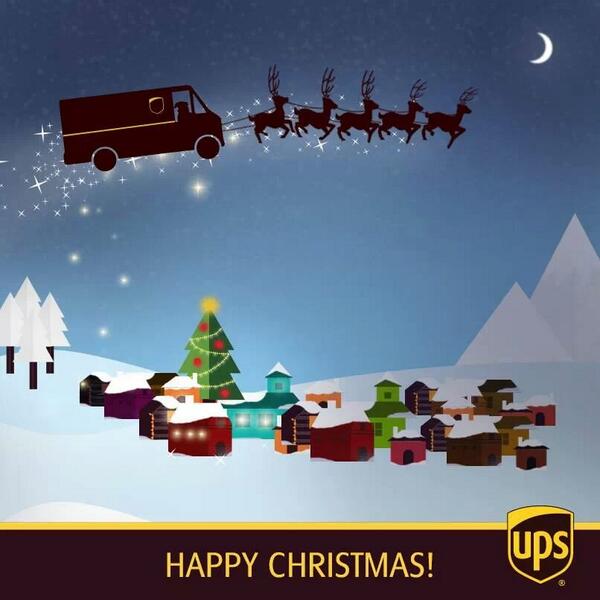 Honorary Mentions
(4) Trying to push the envelope. UPS will likely find that the main problem here was setting shipping cutoffs that were simply too late, tiptoeing from „Just-In-Time“ territory into „A Little-Too-Late“. UPS made this effort in order to appease retailers who wanted to leverage every possible day to ship, capitalizing on last minute shoppers. A for effort but it seems like it didn’t cut it.

(5) Looking out for your workforce. This is a personal call but I for one was happy that UPS did not call on their employees to deliver presents on Christmas day. True, a company should go through every possible effort to fix a bad situation but at the end of the day, you need to make sure that your workforce will be able to function after the storm. Looking ahead and keeping your eyes on employee management, despite the price you and your customers pay, is a admirable trait.

At the end of the day, UPS planned and God laughed…but many customers at home were not laughing. With the ongoing rise of online shopping, customer expectations for almost real-time shipping and tightknit competition between mega-retailers, expect all courier companies to hunker down and make sure that next year, every package gets ho-ho-home before Christmas.[/fusion_builder_column][/fusion_builder_row][/fusion_builder_container]